There, I said it!

At least I can’t be accused of being not fair and balanced, right? (:

Recently this site celebrated its 3rd anniversary and I have to say in 3 years I am sure of one thing – Landlords and the Landlord Associations in MA are politically impotent!

Landlord groups refuse to get united and there is no support for changing the laws from the general landlord population.

This summer I contacted the major groups of landlords and asked them if they wanted to unite behind one escrow bill. The answer was “No”.

I asked if they had any bills of their own that they had written and were supporting and if I can see the language. The answer was “No”.

I asked if they are interested in writing a joint letter to legislators adding up all our subscribers and internet visitors in order to get meetings with Legislators and the answer was “No”. In fact the largest group told me that their mission is “revenue and growth first, advocacy second.” (by the way, none of these groups size is big enough to make legislators want to meet with them but I thought together we might be big enough.) Anyway, the answer was “No”.

I asked that at least we sit united around one table to show unity when we go to these State House Hearings on bills that concern us. The answer?  “No”.

Over the past 5 years I have been to many hearings and only about 10 same landlords show up at these critical and very important hearings – about 2 people per every major landlord association. Where are the other landlords in MA? Some of these associations have over 1,500 people on their lists and all of them are well aware of these hearings. Between all the landlord web sites and groups we reach tens of thousands of landlords a month and only 2-3 landlords show up other than the 10 landlords representing the groups?

I thought that maybe their web presence was not strong enough so I created this blog but over the past 3 years I have reluctantly come to the conclusion that landlords in MA are selfish, cheap, not organized and politically active and so they deserve the anti-landlord laws that they get. (Who would have thought that I would ever reach such a conclusion? I certainly never expected to come to this conclusion when I started on this path.)

The online engagement level is extremely low not just on this blog but in general. Even the most “popular” landlord blogs have consistently zero comments. There is practically no interest in learning the “boring” landlord-tenant laws, participating in Hearings (usually there are 4-5 times more tenant advocates than landlords at these hearings) and talking to Legislators.

The last Hearing I went to was whether the storage law in MA should remain the same or get modified and that will be my last time going to a Hearing. 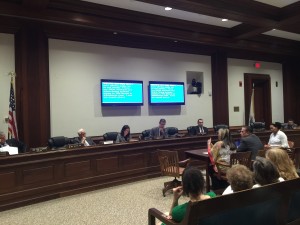 The simple issue with the law is that in 2004 the law was changed where landlords in cases of physical evictions are required to hire a bonded public warehouser not just any storage company which limited substantially the choices from hundreds in 2003 to about 60 in 2004 to about 20 now. They have become monopolies in their respective areas (for example there are only several for the whole Western MA) and raised their prices. They used to ask that we prepay 1 month, then 3 and now some of them are asking for all 6 months in advance. They get 1st lien on the tenant’s property and can sell it after 6 months. The law should change to allow landlords to store the stuff left behind at any storage company for no more than 1 month and the landlords should get 1st lien because they were owed back rent before the storage/moving company was in the picture. Physical evictions can cost easily $3,000 or more. That is money that is legally stolen from us with the full knowledge and blessing of the current law.

But where is the outrage? Where are the landlords to testify and to fight for their rights? It’s not like they were not warned. All groups blasted their lists with the date and time of the hearing way in advance and multiple times.

I have heard various excuses – landlords are busy, landlords are afraid of retaliation, landlords have given up on the political process…In the end it’s all just excuses for being short-sighted, cheap and selfish.

So the only reasonable conclusion that one can come to is that landlords in MA deserve the existing laws and they do not deserve me to do advocacy on their behalf because if they don’t care enough about changing these laws who am I to care? I am a medium-sized landlord already and I am all set. This blog wasn’t created for me, it was for you. Where are you?

There has been some talk that the “solution” is to hire a lobbyist at $120,000. Landlords are so selfish that they are having a hard time with giving $4.16 a month ($50 annual membership is what these groups generally charge) and these groups are fighting for turf and not willing to get united over some pretty simple and common sense things so I don’t see them hiring a lobbyist being a real possibility any time soon either.

Well, best of luck, that’s what I say…but I am out of the advocacy for landlords. This blog will change over time to reflect that. Any suggestions on how to change it are welcome. I know landlords are not interested in legal stuff and advocacy to change the laws but what are they interested in? Any ideas?