MY SUMMARY AND COMMENTS:

Aviksis was the landlord and Murray was the father of the tenant. Murray signed as a Guarantor guaranteeing that he would pay if his son did any damages.

In this case the anti-landlord Appeals Court of MA finds a way (when there is a will, there is a way, right?) to rule that if the tenant caused unpaid damages and you had to ask the Guarantor to pay, they won’t be responsible to cover your attorney’s fees EVEN IF there was a clause in the lease saying that the tenant is responsible to cover landlord’s attorney’s fees in case they went to court. (As a side note here, that’s why I never accept guarantors. I make them part of the lease with their name right at the top as a tenant.)

If that’s not outrageous enough, there is something else in this case that I find even more outrageous:

The lease provided that the tenants were responsible for all separately metered utilities but the tenants did not put the gas in their name nor did they pay the bill and eventually the gas company turned off the heat during a period when the tenants were away from the apartment. It was during this time that the apartment was damaged by water when pipes froze and burst. The landlord repaired the damage. The tenants stayed until the expiration of the lease and then they sued the landlord because “the water damage left part of the unit uninhabitable”. The landlord fired back by saying: actually the water damage was caused by the tenants, you know, look at the evidence. Then a housing judge looks at the above evidence and….wait for it….wait for it….here it comes…decides that the Landlord “failed to show that the tenants” were responsible for the water damage and even though, the judge finds, that the burst pipes had nothing to do with the landlord and there was no unreasonable delay with the restoration of the heat, the housing court judge still finds in favor of the tenant. 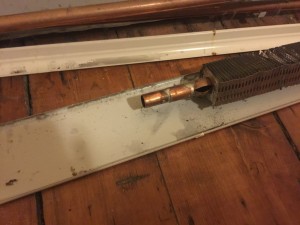 Who does this housing judge think was responsible for the frozen pipes? Santa?

Excuse me, this is not a criminal case where you have to prove something “beyond a reasonable doubt”(even though, frankly, just by reading this case, it is beyond a reasonable doubt that the tenants caused the pipes to burst). But this is a civil case where you only need to prove that something is more “likely than not” and even that basic and easy to reach standard was not good enough for this anti-landlord housing judge to find in favor of the landlord.

Which brings me to the question: What does a MA tenant need to do to be found responsible for causing damages?

Because the tenant won, his father asked to get compensated for his attorney’s fees and the housing judge naturally took his side and issued the order. Thankfully the Appellate Court were slightly (and I do mean slightly) more schooled in logic and reversed her ruling stating that if the Landlord is not entitled to Attorney Fees when he sues a Guarantor (unless it’s in a separate agreement with the Guarantor), then logically the Guarantor is not entitled to have the landlord pay his Attorney’s Fees either.

Here is how this case should have been decided: The tenants caused some damages to the apartment and they should pay for them or their Guarantor. Since they did not pay for them and the landlord had to resort to hiring a lawyer, the tenants and therefore their Guarantor should cover that cost as well since there was some language in the lease stating that the tenant is responsible for attorney fees. The landlord should pay to the tenants what he owes them because of mishandled security deposit. That’s all.

And by the way, the Appellate Court Judge who wrote this Opinion should win an award for a most convoluted writing style. I had to read this case at least 3 times to figure out what he was talking about. Clearly he is not aware of the KISS (Keep It Simple, Stupid) doctrine. Decisions should be written so that regular people can understand them.