The Supreme Judicial Court of MA has been asking the Legislature to give courts more money for awhile now and so they created a “Commission on Access to Justice”. Out of the 25 people sitting on this “commission”, according to SPOA.com, most are pro-tenant judges and lawyers, not a single pro-landlord person. In fact even several Housing Court judges were invited to sit on that Commission. And now this “commission” naturally has come up with a Bill to…guess what…get more money from the Legislature to expand Housing Court to cover all tenants in MA. I am fine with that but if that is to happen, Mandatory Rent Escrow is required to pass as well. Otherwise, this expansion will help no one and it will make things for both landlords and tenants worse.

MassachusettsLandlords.com supports SPOA.com and MassLandlords.net to oppose the expansion of Housing Court unless we get mandatory rent escrow to fix what they call “The Free Rent Trick”.

By the way, I call it “Tenant Retaliation Against Landlords“, they call it “The Free Rent Trick.” I think my way is better (: It sounds much more serious when you say: “Senator Eldridge supports Tenant Retaliation Against Landlords” than to say “Senator Eldridge supports the Free Rent Trick.” (well, who doesn’t support a nice magic trick now and then?)

There is nothing inherently wrong with expanding Housing Court to cover more people but there is also nothing inherently wrong to stop Tenant Retaliation Against Landlords – we just don’t want tenants to call Health Boards in bad faith and if they do, they should be prohibited from using those reports in court. On many occasions tenants call the Health Board in bad faith or in retaliation not because there were poor conditions or the landlord refused to repair but because they were doing something they were not supposed to be doing and were told to stop it or they received a written notice from the landlord. The best way to demonstrate that they DID NOT call the Health Board in bad faith or in retaliation is to place the full rent due (documented repairs can be deducted from it) the moment they call the Health Board or the moment they decide to “withhold rent”. The escrow can be held in court escrow or in a bank escrow where the money will be accessible only by both landlord and tenant signatures (in case they reach an agreement) or by a court order.

Requiring mandatory rent escrow is fair not only for the landlord but also for the tenant and will prevent many unnecessary evictions. What happens in MOST cases is that the judge says something like to this the tenant: “Ok, you get $500 because I find that there were poor conditions but you also owe $3,000 in back rent. The law requires me to give you two weeks to pay $2,500 to the landlord or the eviction will issue automatically against you.” Because most tenants were not required to save the rent in escrow (they spent it on groceries or whatever) at the end of two weeks they don’t have $2,500 to pay and they get evicted. All of that can be prevented by having a Mandatory Rent Escrow Law passed! So this is not just pro-landlord. It is pro-tenant too! 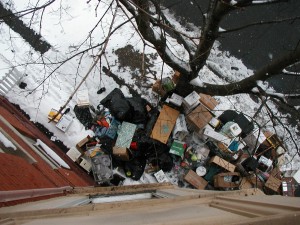 The funny thing is that Housing Court argument to not collect escrow has always been “We are understaffed, we don’t have the time or the money” but suddenly they with the help the Legislature found millions of dollars for a statewide expansion. Hmm, clearly they were BS-ing us but we already knew that. There is no excuse not to have mandatory rent escrow.
I own 55 apartments and have been a landlord for over 17 years. I am not new to Housing Court. I estimate that more than 75% of cases where the Health Board was involved were bad-faith cases where the Health Board was called NOT because the Landlord refused to repair but because the tenant either ran out of money for the rent or called in retaliation to something the landlord said to them.

I am not saying other landlord-related bills proposed by Landlords, for example, to fix the security deposit laws, the move and store laws, etc, are unimportant but Tenant Retaliation Against Landlords is by far the issue that is costing the most to landlords even if they don’t realize it! It’s probably costing more and causing more unnecessary landlord-tenant confrontations than all the other issues combined! We should all unite behind it and push, push, push until it’s done and then we can concentrate on passing the others. Pushing for a million things at once is confusing to Legislators.

There is nothing wrong with tying this issue with the Housing Court expansion. No more pro-tenant laws in this state until we get one pro-landlord law passed…or something like that.