The City of Boston started to require mandatory inspections by the Health Board to all apartments in the City and there was a hearing on 03-31-14 which I attended. The reason I am interested is because this misguided approach might spread to other cities in MA. 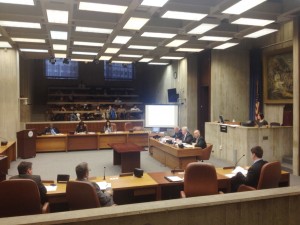 Here are my comments and observations:

The Hearing did not give Landlords equal time. To begin with  – only 13 Landlord advocates testified and 23 tenant advocates testified but my point is that those 23 tenant advocates (especially the Health Board of Boston) were given on average longer times to speak and answer questions. The Hearing lasted about 4 hours. I would estimate that about 3.5 of those hours were given to the tenants’ side of the story.

In addition to that, The City Council showed great disrespect to our point of view because most of them went home and left us testifying to an empty room. There were 13 Councilors at the start of the Hearing and after hearing from the Health Board and delivering their little speeches they left the room. There was only one councilor left (not counting the Chair and Vice Chair who had to be there, I guess) by the time I testified. This simply creates the impression that the point of view of the Massachusetts Landlords does not matter. Can you imagine if the Supreme Court Justices (all 9 of them) listened to the first party but for the second party in the case all of them left except one?

After the Hearing my conclusion is that this Ordinance was pushed by the Health Board who has a hidden agenda to benefit from it at our expense. The Health Board fought tooth and nail to preserve and expand this Ordinance. The same old landlord horror stories were dragged thru the mud. They complained that landlords’ numbers are not listed on the outside of the building and they can’t contact them but they failed to mention that there is already a law requiring landlords to post their number on the outside of their building. Why can’t they enforce the current law? They were quite proud that 75% of landlords already registered their units and are paying the new fees. They admitted that they are making $40 million when they only need $17 million to operate the Health Board. While I was sitting there listening to their testimony I realized what this is all about – they clearly do not need this new tax revenue to operate but they want it so that they can stay busy. It’s a job preservation Ordinance for them. Plus all these extra inspections will require more inspectors which means their managers (the exact same people who were there the other night) will be able to ask for a salary increase. Sweet.

I am tired of all the sob stories that tenants and their advocates use to push this tax increase down our throats when many of them cause the “poor conditions” themselves. One doctor testified how a child came into her office with severe asthma barely being able to breathe. The family admitted that the child was allergic to the cat that they got to “eat the mice” in the apartment. So basically this asthma situation was created by them. We are still using cats to combat a mice problem? Maybe it was Ok in the 19th century but now we have many safe and efficient over-the-counter products to address having mice. A lot of time was spent talking about Landlord Retaliation Against Tenants but no one mentioned that most of the current calls to the Health Board happen because of Tenant Retaliation Against Landlords which is still legal in MA (otherwise known as “The Free Rent Trick”).

This new tax will simply add another burden on the Massachusetts Landlords and will not create safe and affordable housing. It was said during the Hearing that already 67% of Boston’s revenues come from property taxes. In other words, Massachusetts Landlords pay 67% percent of the salaries of everyone working for the City. But that, apparently, is not enough and they want to add another $3 million/a year. This tax increase will not work for the reasons I already mentioned in my prior article on this topic  –

a) there is already on the books a requirement that the building inspector inspect every building  every 5 years which should catch things like illegal apartments and lack of proper egress as those are Building Code violations.

b) 75% of landlords already registered and probably another 20% will register but the 5% of slumlords who supposedly this Ordinance targets will NEVER register. The good landlords will again pay the price for the few bad apples. If I have no self-respect and if I  don’t care how my building looks, what makes you think I would register and pay you money to come and inspect it? Also going after all landlords for the misdeeds of few is absurd and highly inefficient. If there is a crime the Police does not go door-to-door checking all apartments in Boston. They concentrate on the bad apples using the best information they have at the time. Duh!

Landlords are NOT making a lot of money. Because people think we make a lot of money we have been taxed to death and regulated to death. For the record, we only make about 10% of the rents we collect. All the rest goes to pay mortgages, utilities, property taxes, insurance, advertising, legal and eviction costs, legalized rent theft, etc. Not much is left for repairs. Many tenant advocates complained that rents in Boston are high but failed to mention that a 2-bedroom apartment costs a million dollars to buy these days. If a landlord collected $300,000 from rents (and not many collect that much), her yearly “salary” is about $30,000. To inspect a 4-family will cost you about $100 not even counting the time for you, as landlord, to drive and meet with the Health Board which adds another $100 to the cost. If you have 10 buildings like that, it’s $2,000. That is a lot of money to most landlords.

The bottom line is this – This Ordinance is ill-advised and must be repealed!

What I urge all Boston Landlords to do is write a letter or email to all your tenants explaining the new tax imposed and why their rent must go up with $50/month and give them the emails of the Council and Mayor.

I also urge all Massachusetts Landlords to send emails to City.Council@boston.gov (this one email reaches all City Councilors) and mayor@boston.gov.

Finally, it was said during the meeting that the councilors are receiving 9:1 more emails from Landlords having issues with this new intrusive approach and this new tax and not many emails from Tenants. Apparently most landlords like to write but they can’t get off their fat asses to come to an actual Hearing on the matter. This reminds me of the gun debate in America. Most people want something to be done with all the guns floating around but they are not vocal and they don’t vote. The pro-gun people on the other hand are a small minority but they are very loud and they organize better. That’s why there will be no gun reform in America anytime soon no matter how many children get gunned down. What I am trying to say is that, we, the Massachusetts Landlords, have to take responsibility for all the anti-landlord attitude, new taxes and laws in MA. We deserve the government that we are getting. Let me just say it again – only 13 landlords testified (and I have to say, most of their testimony was quite lame!) compared to 23 passionate tenant advocates. Massachusetts Property Rental Association and its 23 landlord divisions were missing in action. The Greater Boston Real Estate Board (the big landlords) were there but I almost fell asleep during their testimony. The only person who is still keeping this issue alive and leading the fight against these mandatory inspections seems to be Skip Schloming from the Small Property Owners Association. It’s no wonder that we are not making any money. With friends like that, who needs enemies?