Two or three times a year I complain against people in writing. I see it as my right and an obligation as a citizen. I have already filed 2 complaints this year (one against this mediator and one against a police officer) so I guess I have already met my quota (:. Maybe the long and hard winter brings the worst in people.
I encourage you to complain in writing as well. That is good for our Democracy. It’s not so important what the immediate response will be (usually it’s a denial of any wrongdoing). What is important is the long-term effect of citizens who fight for their rights. 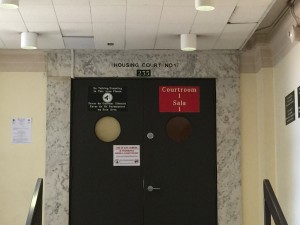 “Recently I sat down to mediate with a tenant whom I was evicting For Cause – being substantially late with the rent every month for the past year and causing some property damage. The reason for the lateness was always given over text as financial difficulties, nothing related to poor conditions which cannot be brought up anyway because this was an eviction for cause.

Since the very beginning of the mediation (NAME REMOVED) started acting like a lawyer (which she is not to the best of my knowledge) by aggressively questioning me in front of the tenant as to why I served them a 7-day notice and I had to explain myself in front of the tenants that this is legal provided it is mentioned in the lease.

Then the tenants said that I charged them a fee for their dogs and (NAME REMOVED) asked me if I charged them a pet fee or a pet deposit. When I said “no” she repeated the question in a very accusatory manner and the conversation escalated when I felt I had to defend myself by explaining that I simply charged the tenants a higher rent because they had dogs that were not service dogs.

These are legal questions and whether the landlord made a mistake or not, it’s not for the mediator to decide and confront in front of the tenants. The mediator’s job is to de-escalate the temperature in the room not escalate it and when a party feels they are under attack or their actions questioned, the conversation will inevitably escalate. When she is acting as a tenant advocate a) that is practicing law without a license and b) it is not helping to calm down the parties and allow them to reach a mutually acceptable compromise. Whether the compromise is legally perfect or not is not for her to decide.

If that was not enough she informed me that she will not check the “judgment box” in my favor and she will explain later why except she never did.

In addition, she asked the tenant if there were any poor conditions that they wanted to be addressed (even though this is an eviction for cause) and of course the tenants jumped at the opportunity to say that the exterior doors need to be replaced. I told the tenant that I do not want to muddy-up the waters with habitational complaints on this Agreement when there has been none up to this point and I would stop by and take a look at the doors immediately after the meeting (which I did and it turns out several new screws were needed to tighten the hinges again which were loose, that’s all) and the tenant agreed that it was not necessary for this to be part of this Agreement. In other words we, the two parties, had reached an Agreement. However, (NAME REMOVED) dug her heels in and refused to remove it from the Agreement because according to her the tenant had “originally said” the doors were bad, she didn’t care that later we came to a new agreement.

I support the existence of Mediators who on many occasions help both parties reach Agreements but please spend the time and money to educate and train your Mediators. They are not lawyers. They should not be practicing law without a license and they should not act like as tenant advocates. Whether something is legal or not should be decided by a judge. The job of a Mediator is simply to deescalate the confrontation between the parties and when they reach an agreement to simply put it on paper and take it to a judge to review and sign.

By the way she did not even do that. When she gave us copies of the agreement there were no judge’s signatures there.

I would appreciate if someone took this complaint seriously and addressed the situation so that it won’t happen in the future. “

Update: I received a response from Judge Dina Fein, Western Housing Court saying “I investigated the circumstances…and am satisfied…that (name) handled herself professionally and fully in keeping with her role as a mediator” (how would you know? you weren’t there..).  She ended her letter by saying:”Please be reminded that mediation is voluntary, and you are always free bring your dispute before a judge”. (Ooh, I am trembling in my little booties. I guess she was so busy making thinly veiled threats that she forgot to put a “to” in front of “bring”. Don’t threaten, just fix your issues. )

This reminds me when some Republicans were saying not so long ago: “Well, if you don’t like that we torture in this country, then leave”. I know living in this country is voluntary but the solution is to stop torturing people not to ask critics to leave the country. Fix the issue, don’t threaten the messenger.