Before I begin, this is a new format for emails that I am using. If you see any bugs, please let me know. You can let me know if you like it too. Most importantly the more landlords are reached the higher chance we have to change the anti-landlord MA laws so 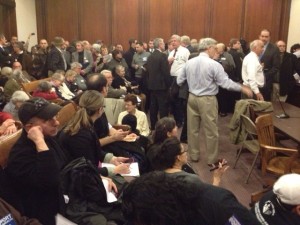 please forward this to other landlords.

I went to the State House in Boston to testify the other day. The rooms were packed with people asking for a Constitutional Amendment invalidating the Citizens United decision of the US Supreme Court declaring that corporations are people and they could contribute to political campaigns. There were also many people protesting what was perceived as a dangerous anti-immigration proposal in response to one person killed by a drunk driver who happened to be an illegal immigrant. The hearings lasted from 1pm to 7pm. Usually they are much shorter.

I wish there were more landlords there. Two out of maybe tens of thousands of MA landlords is not enough and we won’t change the laws with such low turnout. We can’t expect different results by doing the same things.

I will try to keep these posts short. I am not an expert on how things are done in the State House but I will publish all my right and wrong steps along the way to help others.

Several other bills were denied on 02-29-12. Oh well, if only 7-8 landlords show up (as they did) to demand their passage this result is quite predictable. Maybe next year…