And the winners are…Edward Berte and Susie Rich (his boss…I think)!

Around 2010 HAP was the worst of them all. They were so petty and difficult to please that I had given up on them. In their current re-incarnation WayFinders are much better. The new contenders for the title of pettiest and most difficult to work with are RCAP. They have multiple locations. The Inspectors of the Month come to you, I think, from Gardner.

Landlords have been under considerable hardship due to closing of the courts for half of 2020. We were not able to evict non-paying tenants while at the same time we were required to make repairs and pay our bills. Initially the Eviction Moratorium was completely unfunded with just the empty promise that non-paying tenants will owe us the money on paper. But even when it became funded it’s been very slow – currently only about 20% of landlords have been paid. Because we were prevented from filing in court for 6 months (except for health and safety related issues) now there is a backlog in courts and it takes 5 months to just see a judge! (Just as a side note I think that’s the biggest current problem MA landlord associations and groups need to focus on right now). One would think that in a climate like this the Inspectors will show some empathy and take the situation under account and be a little more sensitive and reasonable and not demanding or petty. But, regrettably, no, some people are willing to fail an apartment over the slightest things that do not endanger health or safety and willing to deprive some tenants of the rent help that they so badly need. Some people, instead of being more magnanimous, became more pedantic.

This apartment is in Gardner. RCAP/s share of the rent is $38/month to help the tenant with the rent.

All the report said is this – “Kitchen” – “repair cracks pantry ceiling”, “repair stove burner to light without matches”, “Bathroom – repair wall by shower rod”, “Other rooms” – “properly repair walls”, “Building Exterior” – “repair porches or show documentation from licensed contractors that porch is safe’, “repair loose or missing siding around the house”, “repair and paint wood skirt around bottom of porches.”

I talked to the tenant and wanted to come and see the items in the report the same day but the tenant was in a hospital for a surgery and so we agreed on Monday 8-30-21. I wrote Edward an email letting him know all of that and just to establish a line of communication.

He ignored my email and did not reply.

On Tue 8-31-21 after my inspection of the apartment I wrote to Edward again. There were items in the report that were vague, general, not specific, there were no pictures so I needed clarifications by him. The cracks in the kitchen ceiling were very minor. I looked around the apt for wall damage – there were some old holes in the walls I assume done by the tenant and patched by the tenant (not very professionally, I will grant you that) but the tenant did not want me to move furniture and paint right now and I don’t repaint in the middle of a tenancy anyway, certainly I am not going to start moving furniture, plaster, sand and paint against the will of the tenant. In the email I told him that the burner was not lighting up because it needed to be cleaned and the tenant agreed to do that, the bathroom issue has been already fixed by a relative of the tenant and the shower rods and curtains are securely attached, front porches are fine and have been inspected and approved recently by a Structural Engineer and I attached the SE’s letter to the email, the siding is asbestos and should not be touched or “repaired”, it’s best to leave it alone, the wooden skirts around the porch is a strictly cosmetic issue as there is no lead paint involved, besides there are no children under 6 in the building even if it was lead paint. 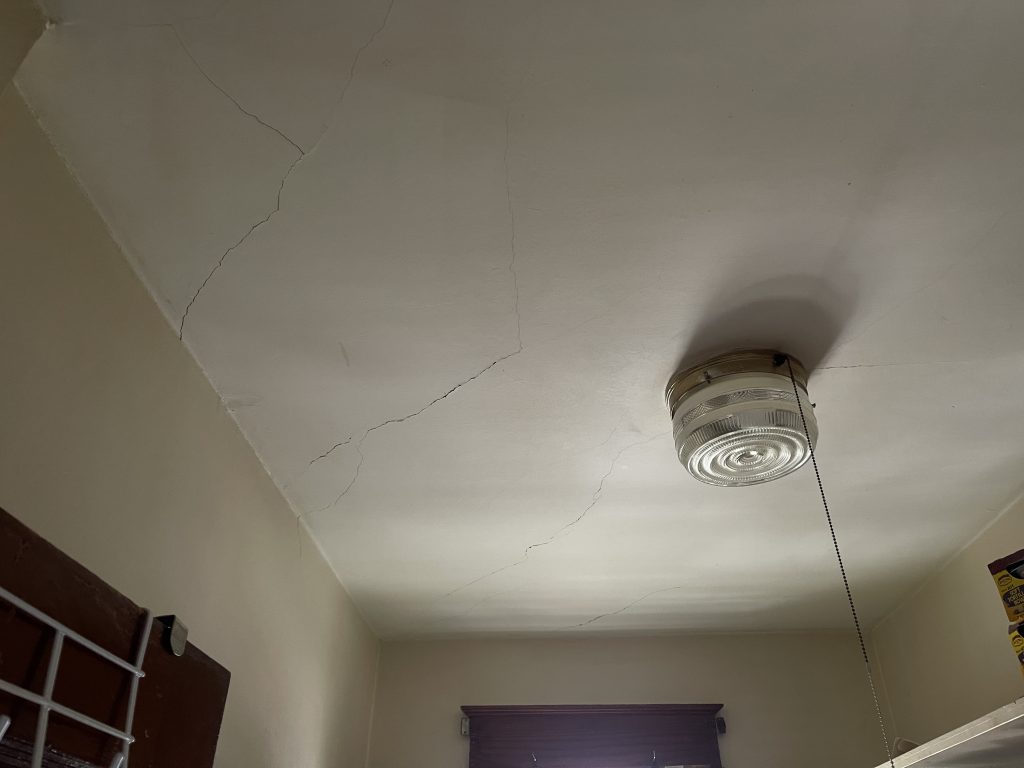 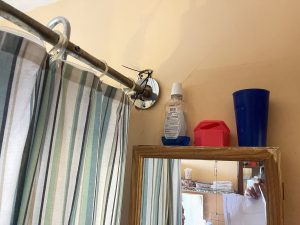 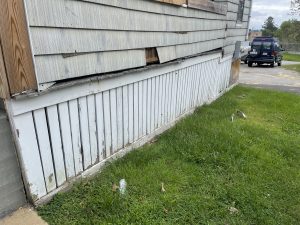 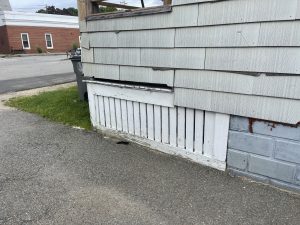 I attached pictures to my email.

Edward did not reply to my email. I assumed my explanations in my email were OK to him and I had forgotten about the whole thing until 10-29-21 when I received a Notice of “Suspencion” (the typo is theirs not mine) and Abatement of Rent. This time there were 4 pictures attached – one asbestos tile missing, a piece of plywood under the electrical meters (that the inspector did not like how it looks, I guess), peeling paint of the white wooden porch skirt and a new item not on the original report – porch carpet that is torn.

I was surprised and alarmed by that letter and so I emailed AND called AND left voice mails to Edward (multiple times). Finally it took me 4 days but on 11-1-21 I was able to talk to him over the phone. I wrote him an email right after the conversation to summarize it: “per our conversation this morning, I will check on the siding tiles if something can be done about it and the wood skirt around the porch with the non-lead paint peeling but all the rest has been effectively satisfied and repaired for now and it should be removed from the report and the rent not suspended or abated as the remaining violations are really minimal.” During the conversation I had asked him if he had received my email from 8-31-21 and he said that he had received it.

The next day 11-2-21 I went to the building to make repairs. I repaired the piece of siding from the pictures from the 10-29-21 letter by installing a new wood shingle and covered the torn carpet with a rug. I sent him an email with the pictures showing the repairs and asking if I can cover the porch skirt with pressure treated wood after the winter. Again, he did not reply to my email. I had to leave unreturned voice mails again and keep calling until finally I got him on the phone on 11-3-21 and he told me he received my email but he is afraid to open it because there might be “viruses”, there are characters in it he doesn’t understand, something about Apple so he will forward it to me so I could see what he means. (He never forwarded it to me). In any case there is one asbestos shingle on the back side of the house that is lopsided and “might fall”, he said, so it needs to be fixed and the wood skirt needs to be repaired.

I went there the next day, got a tall ladder and risking my life (literally!) I fixed the offensive siding shingle that was causing this international crisis and I started covering the wood skirt with pressure treated wood even though this skirt business was totally unnecessary, not dangerous in any way and a total over-reaction on their part. 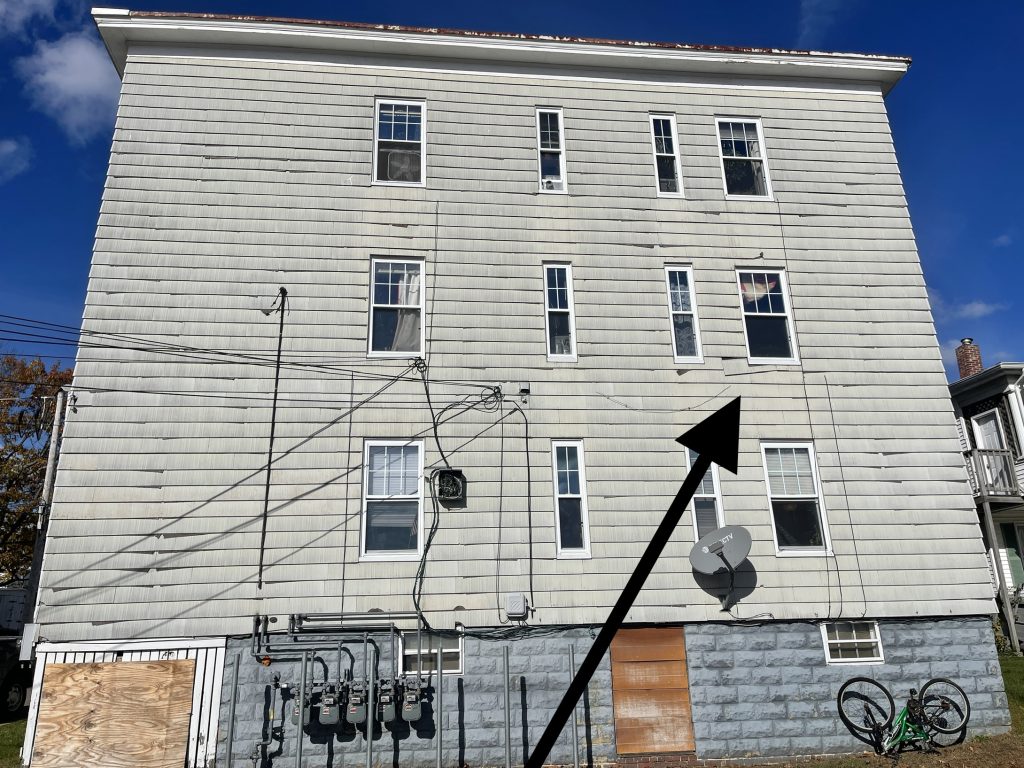 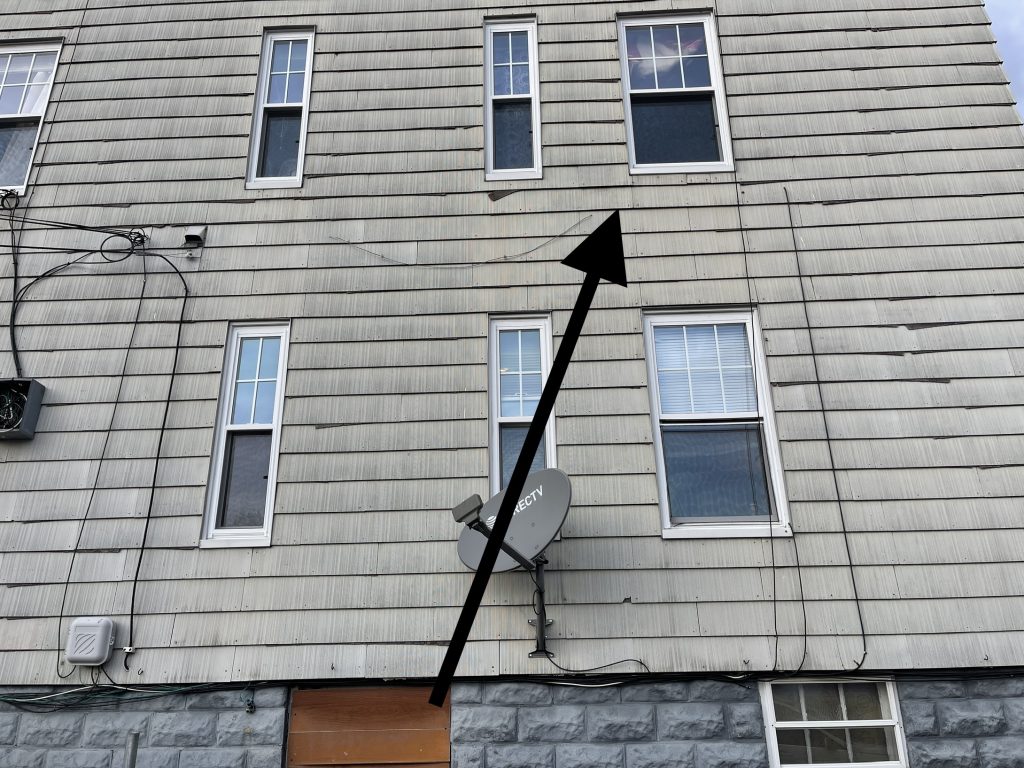 Willing to fail an apartment and stop rent subsidy over a slanted tile? Apparently so.

I think on 11-4-21 I spoke with Susie Rich about all of this. She said she will send me an email with her email so I can send her pictures. She never did and did not reply to my subsequent emails and voice mails regarding this either.

Their share of the rent was not paid for November. They withheld the whole rent of $38!

On 11-8-21 someone called Leonardo sends me an email. In his email there is an attachment saying that according to their “training guide” from 2012 any chipping paint even when not lead paint will fail the apartment. I am not sure where the training guides from 2012 got that from but paint that is non-lead is non-toxic and does not need to be abated or fixed or covered, etc. An actual citation from a Code or Law is needed. I am pretty sure their “training guides from 2012” are just being overzealous and this is not based on any actual law. RCAP misunderstands the whole point about peeling paint – it should ONLY be cited when it’s lead paint and even then personal judgment and putting things in perspective should be applied before being cited for example don’t fail the apartment if there is peeling soffit and fascia that is minor like maybe several square inches or a sq. ft.

They sat on my email for 2 weeks and responded on 11-24-21. November was already over pretty much because of the Holidays.

On 11-29-21 they re-inspected telling me all violations have passed except there is a “small section of broken and cut hazard siding by the trash bins”.

They did not pay the $38 for December.

Had Edward Berte  promptly responded to my emails we would not be still talking about these things in November and December.

The sad truth is, and they can deny this all they want but we all know it’s true, my opinion is that they are NOT doing this to protect the tenant, they are doing this to protect themselves, to cover their behinds and justify their cushy jobs. If they cared about the tenant they wouldn’t put in their reports general and meaningless orders like “properly repair walls” and would reply to their emails and voice mails. If I have to properly repair every tenant-caused hole and wall imperfection I will have to charge the tenant because the walls didn’t get like that on their own. In addition, this is an old apartment and an old building with many defects, it all depends how petty one wants to get. This is not a luxury new gated complex and the rents also reflect that. Mine are some of the lowest in MA.

Here is what GOOD INSPECTORS should do and should not do:

And yes, I fixed the the non-structural, non-lead paint, non-dangerous or non-hurting anybody porch skirt and it cost me over $400 to cover with new pressure-treated wood.

And the tenant patched the cracked ceiling on the kitchen pantry even though it was very minor and should bot have been cited. 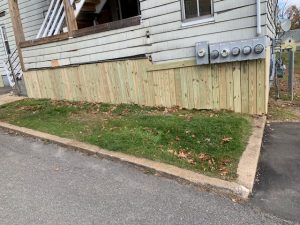 Now there is still a “cut hazard” next to the trash bins (which was not mentioned in the original report) which I must repair after the winter.

That’s the peace agreement that was negotiated. 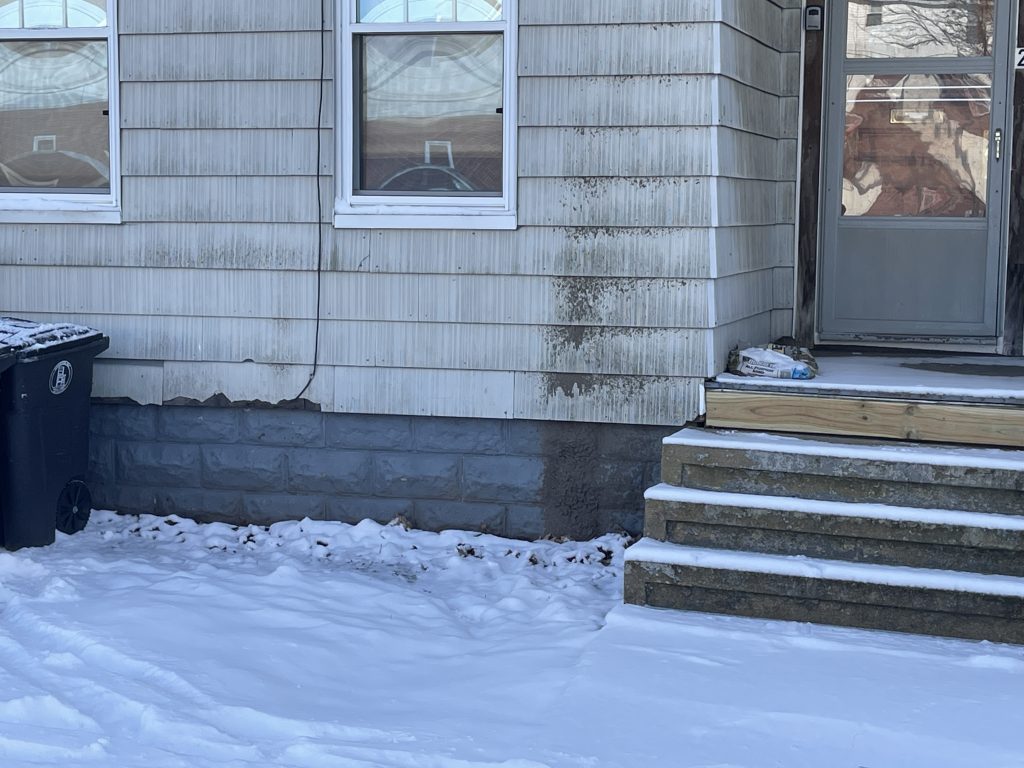