On DATE around 3:30pm I had an encounter with the NAME Police Department. Here is the letter I wrote to the Chief:

“Several days ago when I was working at one of my buildings I witnessed a serious fight between a young guy and a woman. The woman was screaming and crying how “you always treat me so bad” and how “I don’t deserve to be treated by you like that”, ”I haven’t done anything bad to you”, “Open the door and let me in” accompanied with kicking, slamming and throwing things as she was loudly crying. I went up and asked who they were. They told me they were the grandson of my Tenant and the woman is “the fiancé” of the grandson and once they learned I am the landlord things quieted and she went into the storage room on the porch (what?) and closed the door. I have been a landlord now for 23 years with 45 apartments and from the painfully familiar far-away look, the clothes they had and the way they talked and acted they looked to me they were heavy drug-addicts. Then later I stopped by again because I found it strange that she went into the storage area and closed the door. The door was open and there was no one in the room. It looked like they were living in the exterior porch storage room – using extension cords plugged into the light socket! There was a working TV, fan in the window, cups filled with something, toiletries, clothes hanging on a rod, sheets, blankets, etc. 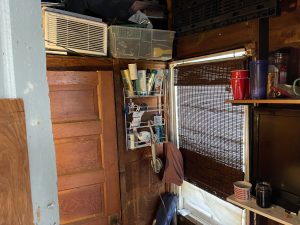 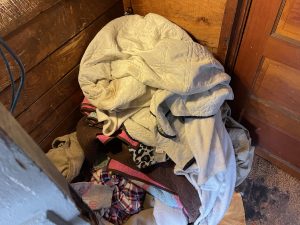 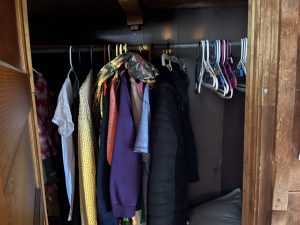 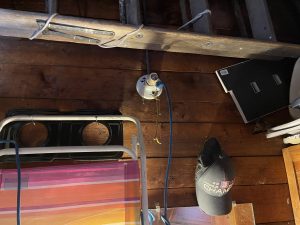 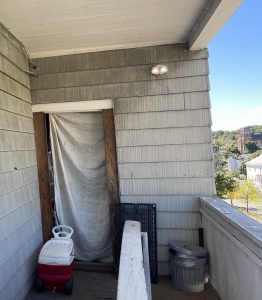 I texted to my long term tenant of 12 years, an elderly woman with cancer going thru chemo and multiple operations, describing what I had observed and she texted me back “I am back at the hospital I want those 2 gone don’t want them in my apartment call the police if you have to, they don’t belong there, I just got out of surgery and I don’t need this.”

The next day she texted me again – “Hi Elmir, I’m sorry I just got home from the hospital I am a wreck. They are still there I don’t even have the energy to yell. I just want them out..He seems to think that just because this address is on his bills he lives here but that is not true. Please take the door off thank you and I am so sorry”. When I asked when she wanted me to take the door off the outside porch storage room she said anytime.

Ok, so the next day I went and removed the door. My tenant, her ex-husband and I both found them there inside sitting on the floor. The grandson called the police on his grandmother and she called the police on him at the same time. Two police officers arrived and I didn’t hear them say to the young couple that regardless of their status as tenants or occupants or guests or squatters they cannot stay in a storage room/area because that is not a habitable space per Health Code and Fire Dept as it has no running water, outlets, toilets, etc. Instead, they turned to me and explained to me the MA landlord-tenant law. They told me that in MA the landlord-tenant law says that if a Tenant invites someone they automatically become a tenant as well and the Original Tenant who invited them can do nothing about it except file with Housing Court and if that 2nd person invites a 3rd person completely unknown to the Original Tenant then that 3rd person is entitled to live in the Original Tenant’s apartment against the wishes of the Original Tenant and so on and so on.

So according to the two  police officers’ landlord-tenant law interpretation – if you invite a non-paying guest in your home, then if they turn, let’s say a year later, into a junkie, they can invite all their other “friends” from the sober house against your will, not pay any rent or any money (as was confirmed by my tenant is the case in this case), use your water (in this case the landlord’s water) and electricity and you have to wait 5 months (no, that’s not an exaggeration) to see a Housing Court judge? No word coming from the two police officers about maybe not being a tenant but just being a guest because they pay no rent to the landlord or the tenant, a disinvited and hostile guest at this point, no word about possible elder abuse, restraining order options, no-trespass order options, etc, no initiating some process to intake or refer a homeless person or persons to a shelter, etc? Instead, knowing very well the arrest and drug history of the young man and woman, they attacked my tenant, an elderly cancer patient who lost two sons, and me, the Big Bad Landlord. After I told them the grandson and his fiancé can go back living into the apartment if that’s OK with my Tenant until we sort this thing out but they certainly cannot live in the outside porch storage room, one of the two police officers told me in front of them: “Well, if they can live in the apartment, the storage room is part of the apartment, isn’t it?”

The next day I gave my tenant the numbers for Elder Abuse in MA, Community Legal Aid and the Central Mass Housing Alliance. And, by the way, she did send me a couple of texts that same day confirming my suspicion of drug use – “NAME had been living in Springfield at a sober house then moved to NAME mother house in Holyoke, then they had a fight and he came here for a day then went back to her, I can’t remember when but it was awhile after that they had another fight he came here and said he was going to get his own apt, then he went back again with her , It has been a vicious cycle since then. NAME came here and they both went to live with his cousin that was just the other week. When he and NAME came to live here a couple weeks ago I told them both they could not stay here I do not like her and NAME does not listen to any I say and I do not like the lifestyle they live” plus “I know they are doing crack because I found a baggie in the bathroom after she came out flushed it down the toilet, and I suspect heroin cuz of their actions.”

UPDATE: Several days after I sent the email to the Chief these people were removed by the police but not because of my signed No Trespass Order which the police refused to enforce but because the tenant went and got a Restraining Order from NAME District Court.