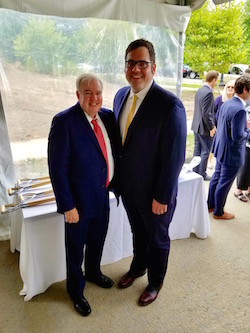 House bill 5018, An Act to “guarantee housing stability”. This was just approved by Housing Committee and given to the full House for a vote. This new moratorium does not require that the non-payment of rent is Covid-19-related. The tenant can just stop paying rent and the landlord can do NOTHING for several years!!!! Self-help is not an option because you go to jail and you cannot talk to a judge because the courts are closed!!! Due Process rights in the toilet. Lenin and the Bolsheviks in the Soviet Union confiscated all land, buildings and private property a hundred years ago and gave it to the State. Looks like our friendly socialists in Boston found a better way to reach Communism faster – just cancel the rents. I come originally from Bulgaria which was a Soviet satellite country from the Eastern Bloc from 1944 to 1989 and I saw firsthand what building Socialism and Communism looks like so I know what I am talking about. 82 Legislators all Democrats are sponsoring it which is almost half of the Legislature.

(1) the tenant has failed to pay the rent;

(2) the tenant has materially violated an obligation or covenant of the tenancy or occupancy, except the obligation to surrender possession upon proper notice, and has failed to cure such violation within 30 days after having received written notice thereof from the owner;

(4) the tenant is using or permitting the unit to be used for any illegal purpose;

(Landlords cannot use the “no-cause” reason anymore. All evictions must have a stated cause. If you or your family want to live in the apt then state so. My understanding is that many landlords use the “no-cause” evictions even though there is a cause of some sort, some violation of the lease, but they are just using the “no-cause” to avoid confrontation with tenants and to avoid having to prove the violation in court. What they don’t realize is that a “no-cause” eviction allows the judge to allow the tenant to live there up to a year especially if they are old or disabled and if they pay the rent so if the tenant does something that bothers you, I would think you would be better off to do a “for-cause” eviction and get it over with rather than living with the nuisance for up to a year.

What bothers me more is the 30 days to cure. This needs to be not more than 3 days and in some cases depending on what the violation is it should be 24 hours to cure. Subjecting neighbors and other tenants to live with the violation for 30 days is unfair. Here are some examples of causes and while you read them think about you and the neighbors having to live with that for 30 days while the notice expires and the landlord is helpless to do anything – sub-letting to registered sex offenders or drug dealers, illegal vicious dogs, too many people living there, loud parties all the time, smoking, using drugs, fighting with other tenants, flooding downstairs apartments, dogs barking all the time, unpicked dog poop everywhere, damages done by pets, creating unsanitary or dangerous conditions inside or outside, refusing to allow access, blocking common areas or exits, removing batteries from smoke or carbon monoxide detectors, etc. The notice to quit or cure for these things should be 3-days so either the “for cause” evictions should be left as is or the notice to quit or cure should be changed from 7-days to 3-days.

Question for the legislators: What happens under the “just cause” regime if I attempt to adjust the rent with 2% to compensate for inflation but the tenant refuses to accept?)

(Wait, what? The Bill requires landlords for each month they get loan forbearance to “waive and forever hold tenants harmless from the obligation to pay that month’s rent for each rental unit located on the property” unless landlord demonstrates by clear and convincing evidence (what is this – a murder trial, this is way too high of a threshold, the burden should be on the tenant not the landlord) that the loss of income is not Covid-19 related (information which the landlords do not have, only the tenant has).

My comment is this: I find this extremely offensive. Mortgages are only a small part of where the rent money goes into! We also use the rent money to pay city taxes, state taxes, federal taxes, water, trash, electricity, gas, oil, property insurance, liability insurance, workers compensation insurance, umbrella insurance, work car insurance and car maintenance, health insurance, grass, snow, repairs to the apartments and the buildings, wages to maintenance workers and contractors, and finally we keep what’s left which is usually about 10% of the rents in profits to pay ourselves and put bread on the table for our families. So we need the whole rent in order to be made whole not just a break on when we pay our mortgages. And without making the landlords whole you have not eliminated the root cause for the non-payment evictions and they will keep piling on.) HOW TO LOWER RENTS, HOMELESSNESS AND EVICTIONS IN MA

This bill is unnecessary. Covid-19 is subsiding as long as everyone is wearing masks, tenants are not moving much on their own even without this bill (about 20 of my tenants move each year, this year only 7!) and any extension of the Moratorium is most likely unconstitutional unless landlords are allowed full access to the courts even if it’s virtual access and compensated by the State for the unpaid rent caused by Covid-19 since it’s the state who is preventing us from evicting the non-paying tenants.

This just passed the Housing Committee. There are 17 people in it of which 14 Democrats and 3 Republicans. Two voted against and they are both Republicans. Next month on a national level I will, of course, vote for Joe Biden and the Democrats because Trump is simply too dangerous for our Democracy among many other reasons but in MA I will vote Republican from top to bottom. We need a little bit of balance in MA. I am 51 yrs old and I have never voted Republican before except for one person one time! I am a Democrat and I hate to be forced in this impossible position. It hurts me because it’s one thing to defend tenants’ rights which I am for but you have to balance that with respect for property rights as well. MA Democrats show anti-business attitude with reckless abandon and then they wonder why people rather vote for a mentally ill Orange Orangutan to sit in the White House.

PLUS EXTENDING THE MORATORIUM WITHOUT FULLY OPENING THE COURTS (WHICH THEY AS THE LEGISLATURE CANNOT CLOSE TO BEGIN WITH) AND FORCING US TO HOUSE NON-PAYING WATER AND HEAT USING TENANTS WITHOUT ANY COMPENSATON IS UNCONSTITUTIONAL.